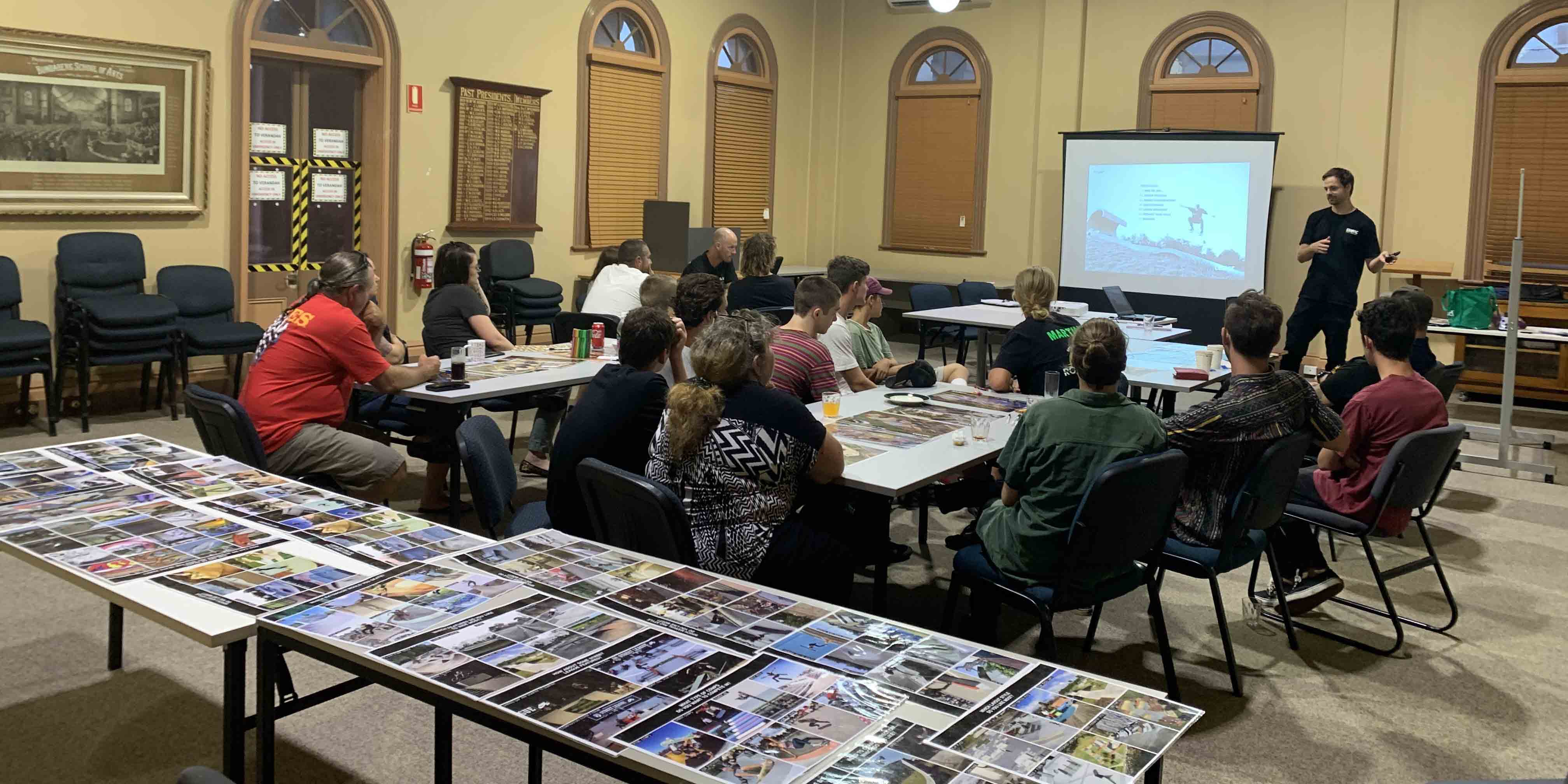 1965 would see a seismic cultural shift when the world’s first skate park opened in sunny Surf City, Tucson, Arizona. Who could have foreseen that skateboarding would go from an underground culture to a global phenomenon with skate parks playing an important role in building healthy communities?

Fast forward to 2018 and a petition of over 900 signatures was presented to Bundaberg Regional Council to upgrade the Walla Street Skate Park in Central Park on the outskirts of the Bundaberg Central Business District. A Council audit confirmed that a facelift was due and announced its intention to develop a skate facility that would help prepare local skateboarders for the Queensland competition circuit, providing contest pathways to national events for local community members while in turn enhancing the local economy through sports tourism. 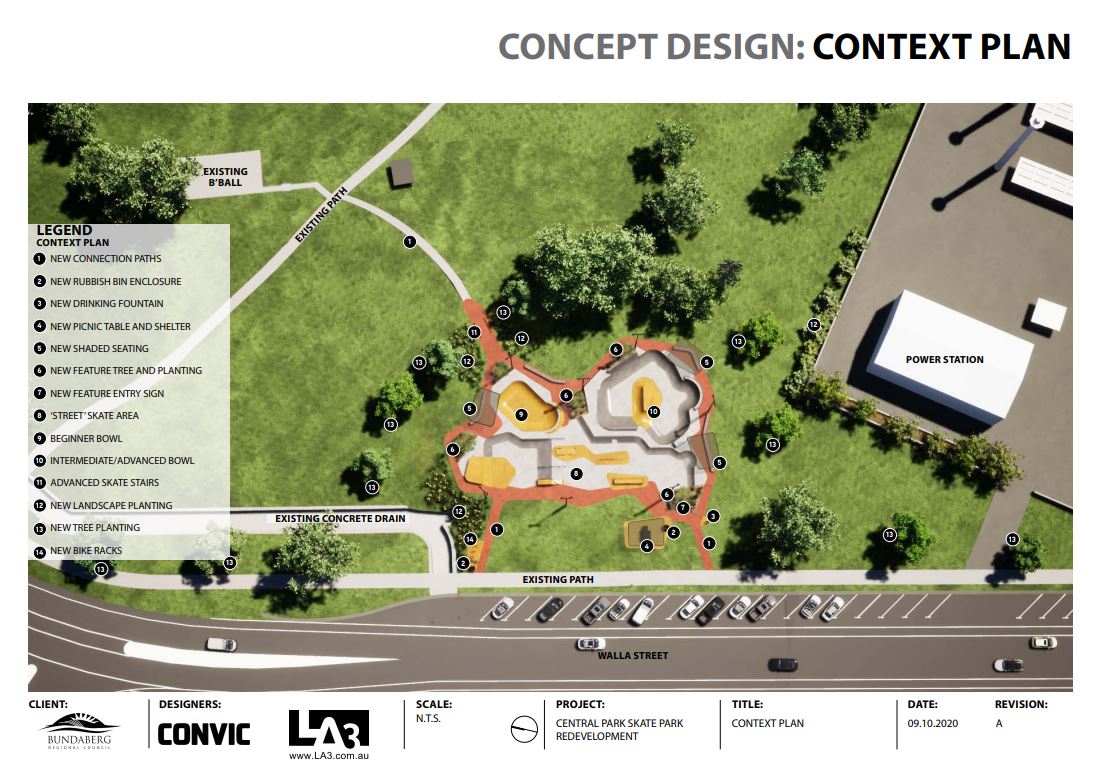 The Concept Design was developed directly from community feedback with additional time provided for further commentary. In addition to the skate park itself the project also included supporting infrastructure, landscaping and improved connectivity to existing pathway networks. Concept Design by Convic and LA3.

Holding an impressive portfolio of global skate parks and youth spaces under their belts, Convic was a natural choice for urban design and landscape architects LA3 to work in partnership with to deliver this project for Council’s Parks team.

Parks staff reached out to the skateboarding, BMX riding, scooter, inline skate and roller-skating community to help inform the design of the skate park and act as an ongoing reference point for the project as it progressed.

19 people aged between nine and 40 years, from beginner to competition level, submitted an expression of interest to attend a design workshop in early 2020. Fuelled by Subway six-inch subs, participants sketched their ideas, voted on preferred skate elements, and worked in groups to brainstorm and share their thoughts.

A drop-in session was held on site the following day for the broader community to chat to the project team about how they wanted the skate park to look and function. Surveys indicated a desire to see more seating for spectators, shade, safe zones for young children and lighting for evening practice.

The concept design was released to the community in September 2020 along with a video ‘fly through’ a computer animated simulation of what the community could expect to see, with accompanying commentary of the key features of the site. The vide proved to be a key communication tool and promotional product in generating excitement around the project.

In addition, an ideation document talked through the reasoning behind the design components. It was important to us that the community could understand how we had responded to the site in terms of the layout, the skate area capacity and zoning; access, refuge and amenity to improve safe interactions between active and passive users and lastly theming and identity and drawing on Bundaberg’s status as one of the largest fresh produce regions in Queensland.

With the completion of the concept design the project looked set to be completed by June 2021, however the impact of COVID-19 on material supplies and travel restrictions for the consultants coupled with out of season rain events contributed significant delays to the project timeline. 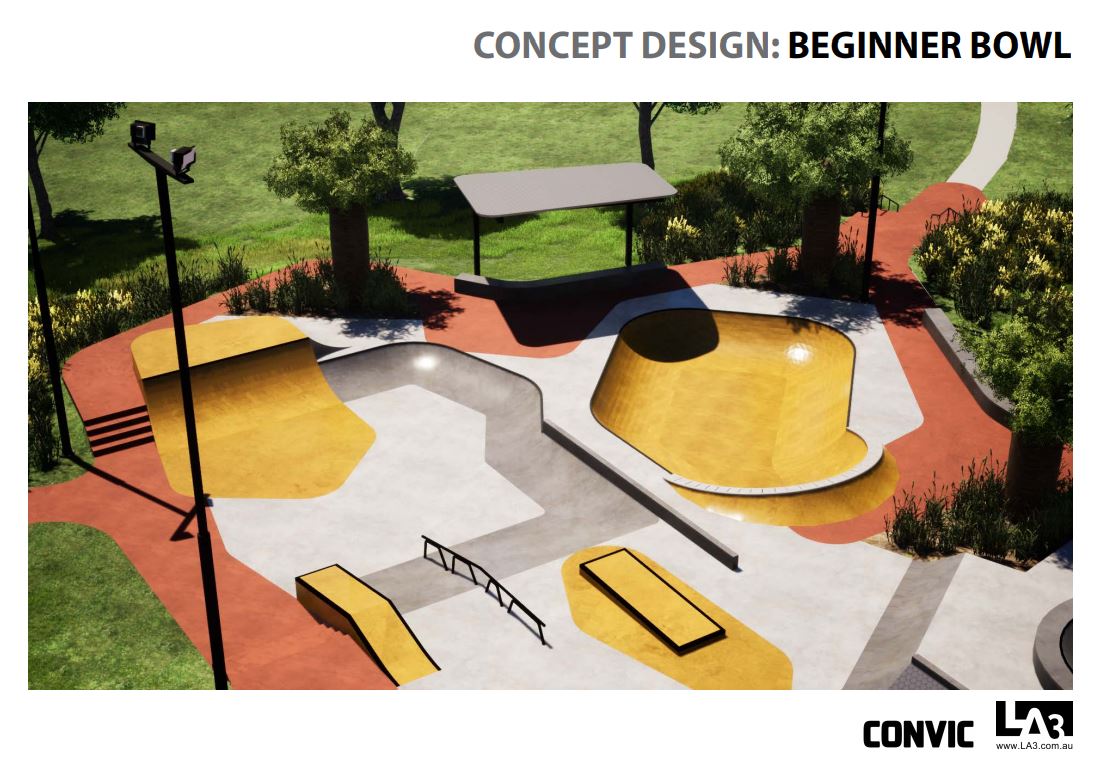 Having a safe area where beginner skate park users could practice was identified early on as a necessary feature of the new skatepark by all user groups. Concept Design by Convic and LA3.

With Trinity Skateparks on board under the direction of Council’s Major Projects team the construction element was divided into three phases. Phase One included the demolition of the existing skate bowl. Phase Two was the construction of the skate park, installation of the amenities building and landscaping which commenced in February 2022. During the second phase the reference group was invited to attend two site meetings with the project manager to talk through where the project was up to, the next steps in the project and answer any questions.

At the time of writing the Parks and Community Development teams are planning for Phase Three, the official opening of Walla Street skate park on 25 June 2022 with free learn-to-skateboard workshops, action sports demonstrations including skateboard, scooter and BMX, and a skateboard competition run by the Australian Skateboarding Community Initiative (ASCI).

We are excited to see the response of the broader skate, scooter, BMX and inline skate and roller-skating community to a site we have committed to meeting the diverse recreation needs for in the community but goes far beyond that in promoting social inclusion, health and wellbeing benefits.

The Central Park upgrade is supported by the Queensland Government’s Works for Queensland Program.